The best of
Canadian education
for a global future.

Part of one of the fastest growing international educational brands with 500+ schools in 20+ countries, Maple Bear South Asia brings the very best of globally reckoned Canadian early childhood and elementary school practices to India, Bangladesh, Sri Lanka and Nepal. We offer Preschool, Elementary and Infant Care programs, delivered in a safe, secure and stimulating environment that instills in students a passion for lifelong learning.

Today, more than 8000 students in 130+ Maple Bear schools across South Asia are benefitting from the methodology and curriculum developed by our Canadian faculty of expert educators, and this number is steadily growing.

The Story of Maple Bear

The idea to develop Maple Bear Canadian schools grew out of the work of the Canadian Education Centre Network (CECN), a non-profit organization supported by the Government of Canada and the Asia Pacific Foundation of Canada which was mandated to market Canadian education abroad to attract foreign students to study in Canada.

Maple Bear was born after CECN managers overseas recognized there was a domestic demand for high quality, bilingual Canadian education from emerging middle class parents, many of whom had studied outside of their own countries in general and in Canada in particular.

The first Maple Bear Canadian School to open was in Indirapuram (New Delhi), India in 2005.

In 2007, Maple Bear became a privately owned company with a dozen schools operating in Korea, Brazil and India. Those numbers quickly changed as news of the excellence of Canadian immersion and bilingual education spread, especially among parents who could see the positive outcomes in language, learning and behavior of their children.

Today, there are more than 500 schools in more than twenty countries with more than forty one thousand students studying at Maple Bear schools worldwide.

We invite you to join the Maple Bear South Asia family as a school owner, a student, a parent, a teacher or a member of the Canadian faculty. 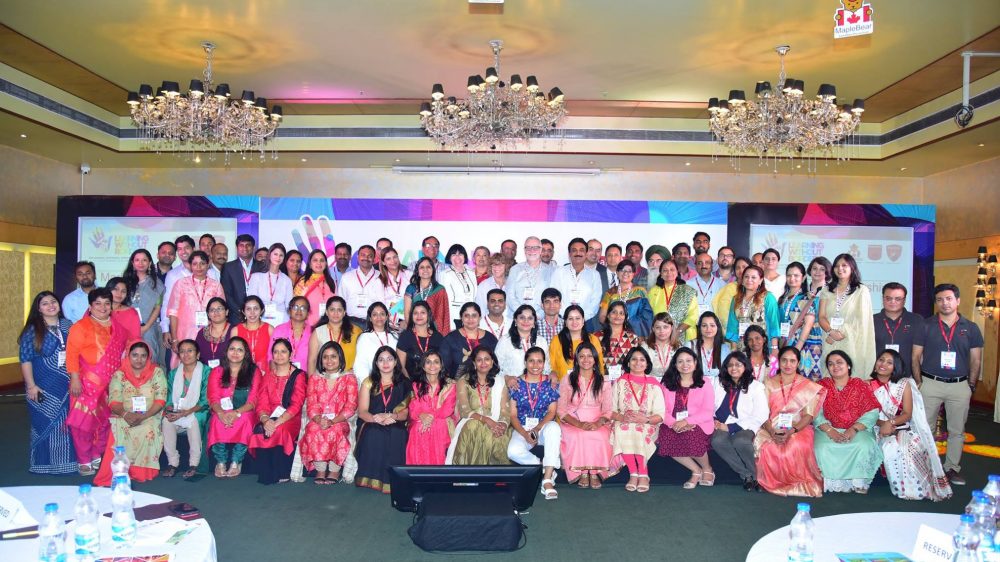 Our goal is to deliver a student-focused learning system in a safe, secure and stimulating environment that prepares students for success at the high school and post secondary level and that instills a passion for lifelong learning. The Maple Bear Program is designed to educate the whole child - physically, intellectually, emotionally, and socially.

In 1981, he joined the Department of Foreign Affairs and International Trade and served abroad at Canada's Permanent Mission to the United Nations, in the Kingdom of Thailand, studied Mandarin Chinese in Taiwan, worked at the Canadian Embassy in the People's Republic of China, and concluded his distinguished diplomatic career in the Republic of Korea. He also served as President of the Professional Association of Foreign Service Officers. In addition to Mandarin Chinese, he also speaks French and Portuguese.

In 1996, Rodney joined the Asia Pacific Foundation of Canada as the Vice-President responsible for the Canadian Education Centre Network project and in 1997 became the first President of the newly-formed non-profit company, the Canadian Education Centre Network. In this capacity he was responsible for building the network from three centres in the Asia-Pacific region into an entity with a presence in 17 countries spanning the globe.

A graduate in Communication and Graphic Design from IILM University, who has recently completed her MBA from Regents University, London, UK.

An animal lover, Piya is an active member of a number of animal welfare societies and is currently in the process of setting up her own NGO to support the cause. She is also a passionate equestrian and has received multiple accolades in the sport at international, national and regional level.

Alok Modi is a dynamic entrepreneur and part of one of India’s foremost business conglomerates – The Modi Group of Companies, with diverse interests ranging from glass, education to travel. Known for his forward-looking approach and incisive vision, Modi plays a vital role in the Group with expertise in conceptualizing, strategizing and setting up new ventures. It was under his leadership that Modi Edutech (Modi Group) entered into a joint venture with Maple Bear Global Schools to form Maple Bear South Asia.

Apart from this, he has been involved in setting up schools in the rural areas of Madhya Pradesh, Gujarat and Uttar Pradesh, imparting education to nearly 7000 students from KG up to Intermediate level and has plans for their expansion and modernization.

Sumit Taxali graduated from Hindu College, MD University, in Computers and started his career journey at an early age with a Financial Institution in the Sales & Marketing division.

He is a seasoned sales enabler with over 15 years of rich experience, working closely with Educational Institutions across India and a verifiable success record of conceiving, developing and executing the strategies and initiatives that drive revenues, growth, competitive market positioning, profits and shareholder value.
With over a decade of experience in setting up formal schools and vocational training set-ups across India as well as international markets, Sumit has worked with several institutions, like NIIT, Global Indian International Schools, Educomp and FIITJEE, specializing in Sales & Marketing, Business Development, Student Acquisition/Admissions and Relationship Management across K-12 & Education sector.

Shalini Jaiswal graduated from Mumbai University. She is the winner of The Foundation Principal Galby Gold Medal (1989) and Lotus Foundation Prize (1989), both awarded by the University of Bombay. After her post-graduation in Textile Chemistry she did her Bachelors in Education from CCS University, Meerut.

Shalini began her career as a teacher at Delhi Public School. From a teacher, she went on to hold various positions in the school. From being the primary teacher section in charge in Chinmaya Vidyalaya, she moved on to be in the core team for developing and implementing experiential learning modules at Cambridge school.

A person who wanted to bring world class education to India, she went on to start the first Maple Bear preschool in India. Simultaneously, she also started her abacus and brain gym centre. She was also a Master Trainer for the abacus program at SIP Academy India Pvt. Ltd., Chennai.

From being a consultant, she moved on to join Maple Bear South Asia full-time as an Academic Coordinator and then as Director of Academics in 2010.

Lenna Glade has been an educator for more than 40 years. She has been a teacher, a school administrator, a Department of Education coordinator and is currently a Faculty Member at the University of Winnipeg in Manitoba, Canada. For the past ten years, Lenna has initiated and implemented several international education projects in her role as Faculty Member. In addition to practicum programs in Thailand and China, Lenna implemented a Bachelor of Education program in Asia and a Post Baccalaureate program in Brazil.

Lenna Glade is a former Academic Director of Maple Bear Brazil. For the past 6 years she has trained teachers and administrators and presented to parents of Maple Bear Schools in Brazil, India, China, Korea, Vietnam and Singapore. Also, Lenna has coordinated the annual Maple Bear Owner’s Convention in Brazil.

Robin Pascoe brings to the position of Director, Global Communications over 40 years of experience in the communications field. A journalist by profession and education, she is also the author and publisher of five books about global relocation and its impact on expatriate families. She is responsible for creating and curating the Maple Bear brand and ensuring it crosses cultures as seamlessly as the Maple Bear curriculum.

The Maple Bear Faculty is a distinguished team of expert Canadian educators. Responsible for writing the specially designed and proprietary curriculum, faculty members continually update the material to reflect the latest in research and Canadian educational practices. Every year the Maple Bear Global Schools team of educators also go out in the field to Maple Bear locations around the world as trainers to help teachers deliver the program, and as Quality Assurance evaluators to ensure that schools are meeting standards.